Between 1963 and 1965 Olivia Molina would sing every evening at Mexico City’s leading jazz clubs, sometimes with a trio, then with a sextet, for example the one led by Armando (Chamaco) Domínguez. Among the features of her jazz repertoire was the entire range of US evergreens: ”The lady is a tramp”, “Stormy weather”, ”Fly me to the moon”, “Misty”, “Sentimental Journey”, “Secret love”, “Lover”.

In 1964 Olivia Molina won the Jazz-Festival organized annually in Mexico City for artists from both North and South America. Originally she had wanted to move to the United States for the sake of the music there. Yet life took another turn when her mother, born in Flensburg, decided in June 1965 to move back to Germany. Making a start in Hamburg was difficult. As a start, Olivia Molina sought to make a new career on the club scene in Hamburg, appearing at such famous Jazz and Rock clubs as the Cotton Club, Star Club, Top Ten, etc. Like all foreign artists arriving in Germany at the time, she too had to fall into line with the strictly domestic German hit (Schlager) scene. Having scored some striking successes for five years, Olivia Molina no longer cared for a ”drill” not corresponding with her own goals as an artist and musician.

In search of a new identity she then began to rediscover Latin American musical culture. Nearly two decades have since elapsed, and when the name Olivia Molina is mentioned, one thinks of her Christmas concerts and her superb programme of tangos, but also of her distinctive way of rendering Latin American evergreens, all of which makes her among the foremost representatives today of Latin American music.

From “Latin“ to Jazz is only a small step. On several occasions in recent years the fusion of both these types of music has been a source of great pleasure. Returning to jazz after so many years is not intended as a new departure for Olivia Molina, but a reunion with something familiar, hence: Welcome back to Jazz – Olivia Molina. 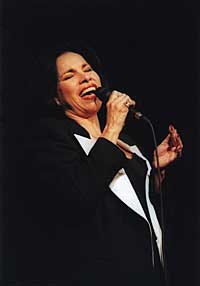 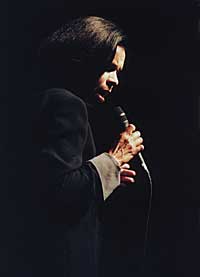