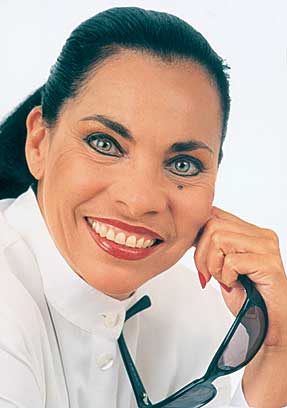 Born on 3. January 1946 in Copenhagen, grew up in Mexico. Her mother was a German dancer, born in Flensburg, her father a musician and bandleader, born in San Cristobal de las Casas, Chiapas, Mexico. Olivia Molina commences her career as a singer in Acapulco, Mexico, when she was 14. When still at school, she scored her earliest successes in hits by Paul Anka, Ricky Nelson and Brenda Lee. Olivia Molina sang in clubs and hotels, and was awarded her first recording contract by the Peerless record company in Mexico City when still a teenager.

1969   Tour with the "First German Women's Cabaret" to Vienna, Zurich, Berne, Lucerne and at the "Stachelschweine" in Berlin.

1970   At the Theater an der Wien, Vienna, she plays the widow in the first German-language performance of John Kander and Joseph Stein's musical "Sorbas". Sender Freies Berlin (SFB) produces the 60-minute personality show "Olivia and an Orchestra".

1971   Olivia Molina is the guest star in Austrian TV's production of "Lodynski's Flohmarkt Company", winner of the "Golden Rose" at Montreux.

1972   She appears in the role of Bianca in Helmut Käutner"s production of Cole Porter and Günter Neumann's musical "Kiss me Kate". Professor Ulrich Erfurth engages Olivia Molina as Spelunken-Jenny for the Bad Hersfeld Festival production of Bertolt Brecht and Kurt Weill's "Threepenny Opera".

1977   With Tony Osborne as band leader and 30 musicians from the United Kingdom, Olivia Molina does a major tour of Germany and Switzerland. The jury of the Deutsche Phono-Akademie elects her "Female artist of the year".

1979   Along with Martha Mödl, Olivia Molina sings the part of Jenny in the long version of "Mahagonny" for the Schleswig-Holsteinisches-Landestheater. During the International May Festival in Wiesbaden she gives the concert "Kurt Weill in America" at the Opera House. The programme is presented by Professor Rolf Liebermann and recorded for the ARD First German TV channel.

1980   For her interpretations of songs by Bertolt Brecht and Kurt Weill, Olivia Molina receives First Prize in the world"s only radio awards, at the Nordring Festival in Helsinki. First performance of the mass "Misa Latinoamericana", her own composition, marks the start of Olivia Molina's first grand Christmas tour entitled "Christmas Songs from Latin America".

1983   Olivia Molina is awarded the "Golden Admission Ticket" for her annual Christmas tour, since the concert had been heard by 100.000 visitors.

1984   Olivia Molina introduces evergreens from North and Latin America in a 90-minute concert for the ARD television channel from the Alte Oper, Frankfurt. Founding of Edicion Indoamerica GmbH, Musicproduction and Edition.

1985   Premiere at the Stadttheater Oberhausen of the musical "Jesus Christ Superstar" by Andrew Lloyd Webber and Tim Rice, with Olivia Molina taking the role of Mary Magdalene.

1986   Olivia Molina is engaged by the Stadttheater Oberhausen, on this occasion for the title role in Andrew Lloyd Webber and Tim Rice's musical "Evita".

1988   Olivia Molina compiles the programme "Songs and poetry from Latin America" for WDR and this is simultaneously recorded live as a CD. First "El Tango Argentino" tour, in which Olivia Molina presents the tango in song form in Germany for the first time.

1991   The Schleswig-Holstein Landestheater engages Olivia Molina for the part of Iduna in the musical comedy "The Firework" by Paul Burkhard, Erik Charell and Jürg Amstein. Olivia Molina"s reunion with the Bad Hersfeld Festival as Spelunken-Jenny in Peter Lotschak"s production of "Threepenny Opera".

1996   Olivia Molina sings at the celebrations of Greenpeace's 25th anniver-sary at the Konzerthaus, Vienna.

1999   Olivia Molina sings Mexican boleros at the "Boleros de Oro" Festival organized every year in Havana by the Union de Escritores y Artistas de Cuba (UNEAC). At the Stadttheater in Schleswig she marks her return to jazz with a concert entitled "Welcome back to Jazz - Olivia Molina" featuring Blues, Swing and venerable American evergreens. Release of the Spanish-language CD "Porque te amo" along with the CD "Las Posadas" (Christmas Songs from Latin America). Traditional Christmas tour 1999.

2000   20 years - Christmas songs from Latin America and the „Misa Latinoamericana“. This is a reason for Olivia Molina to celebrate with her ensemble. Balance of the past 20 years: 600 concerts, 500.000 visitors, 136 children have been singing together with Olivia Molina. 150 Christmas songs have been carefully collected, adapted and arranged. Altogether 17 projects in favour of children in Central and South America could be supported.

2001  Publication of the CD "Olivia Molina - Jazz Jazz Jazz", concerts during the Summer Jazz Festivals in Wiehl, Hildesheim and at the Palatia Jazz Performance on the Madenburg. With a new concept Olivia Molina presents her "Christmas Gala 2001". The repertoire includes Christmas songs from Spain and different countries of Central and South America. She is accompanied by five excellent musicians playing piano, contra-bass, violin, flute and cello under the direction of Heribert Kroll.

2003   Christmas gala 2003 - Olivia Molina starts again her Christmas tour with 18 concerts in the Federal Republic of Germany. This year the association "Patenschaft Kinder Lateinamerikas - Olivia Molina e. V." celebrates its 15th anniversary with a festive concert in the "Kreuzkirche" in Bonn.

2005  Christmas gala 2005 - just in time before starting her Christmas tour with 19 concerts in the Federal Republic of Germany, publication of the CDs "Christmas gala Olivia Molina" and "Libertad" (Folklore from Latin America).